Back in the Saddle on the Cranbury 200K 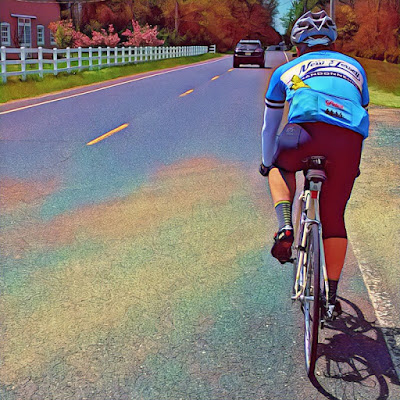 The climb back to event fitness has been slower than I imagined following my total hip replacement in October 2018. For planning purposes, I naively assumed the shortest possible recovery time, as if personal will had anything to do with it. As it turned out, however, my muscles were pretty out of whack following eight years of adaptation first to my 2010 fracture and then to the slow decline that came with the avascular necrosis. It turns out that some of my pain was the result of improper muscle use and general overuse rather than direct joint pain. So over the past six months, I’ve had to retrain the correct muscles to engage which has involved both mindfulness, physical therapy, and training.

In late April I felt prepared for my first 200K having ridden both 100K and 100-mile training rides earlier in the month. I selected the Cranbury 200K in part because it was organized by my friends down at NJ Randonneurs and would provide a great opportunity for brevet socializing and also because the route is blessedly flat. As the date approached, it became clear that the weather gods were on my side. With the exception of a nasty wind, the conditions could not have been better. It was cool and sunny with dry roads and lovely spring foliage in abundance throughout the day.

The enthusiasm for this ride was impressive with over 80 riders registered. I clipped in, following an overnight at my mother’s house where we enjoyed our annual joint birthday soiree and enjoyed the energy and camaraderie that comes from riding with dozens of riders heading out into a brevet. A field so large on a 200K almost ensures that one need not ride alone and this proved to be true for me as I enjoyed catching up with old friends and acquaintances and meeting new ones along the way. I rode much of the first two stages with NJ Rando stalwart Joe R. and we swapped stories about bikes, PBP and friends we have in common. 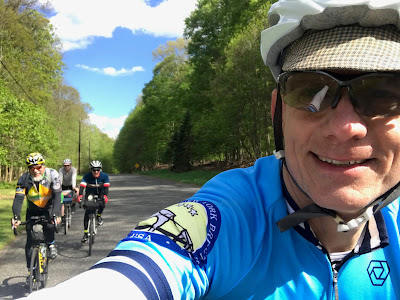 Just as I was approaching the Jersey Shore near Bradley Beach, though, I felt the tell-tale softness coming from my rear triangle that could only mean one thing. My tire was in need of immediate attention. Not more than five miles from the location I flatted on last year’s Cranbury 200K, it felt like some sort of cruel joke. While I replaced my tires the night before with brand new Continental GP 4000s, I seem to have installed my tubes too hastily causing a pinch flat to develop about 60 miles into the event. Luckily, I was able to replace the tube within eyeshot of the beach while sitting on a fresh patch of sod.

Having spent 20 minutes fixing my flat, I decided to pass straight through the lunch control after having my card signed and rear tire inflated and headed off into the hinterlands of South Jersey alone. While I do not recall much in the way of tailwinds throughout the morning, we all definitely experienced some major headwinds on the way home in the afternoon. The winds were of the 20+ mph variety with gusts up to 40 and there were several times I found myself struggling to stay upright. Luckily the route was not a straight shot into the wind so we were afforded breaks along the way. Not only that, a group of four of us teamed up together to ride in a paceline for much of the afternoon making the return journey much more enjoyable as a result of both conversation and workload reduction. 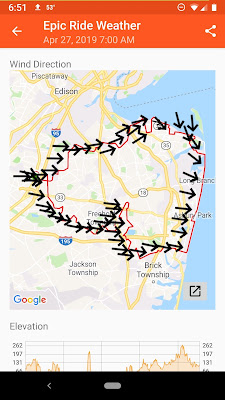 The final control on the well-organized Cranbury 200K offers a welcome banquet of pizza and beer. While I passed on the latter, I had plenty of the former and enjoyed some great conversation with friends new and old. The best part of the day, of course, was what I learned about my physical condition. While a bit tired at the finish, I was sore in all the right ways. Any discomfort came from my undertrained quads and adductors and not and from my hip which was stiff rather than sore. Not only that, but I somehow shaved 20 minutes off my 2017 finish time.

Older Post Home
Subscribe to: Post Comments (Atom)
"Only those who will risk going too far can possibly find out how far one can go." -- T.S. Eliot