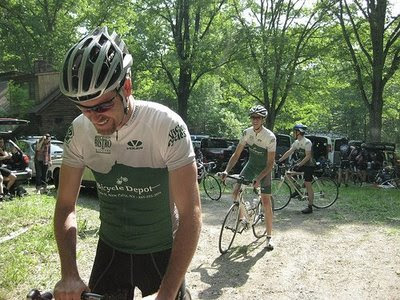 Cars lined the sides of the wooded country road on the edge of the Shawangunk Ridge as riders wearing matching team kits pulled expensive road bikes down from rental car roof racks. The inaugural East Coast Rapha Gentlemen’s Race was about to begin. The rules were simple. Each six-person team had to follow a prescribed route, start together, hit three checkpoints together and finish together. Crews and drop-bags were forbidden. Entry to this invitation-only race was $60 per team and a case of beer. The winning team would win a Rapha jersey for each rider and the second place finishers would take home all the beer.
The field was comprised of eleven teams from as far away Boston and Pennsylvania. Bicycling Magazine, Empire Cycling, Embrocation Cycling, Rapha Racing, Rapha Continental, and others would be in attendance. When I looked at the roster I realized that Selene Yeager (The Fit Chick) would even be racing. It was an eclectic mix of teams with riders of various categories. Some teams, like the Empire pro-development team based in NYC, were assembled of twenty-something CAT-1 racers, while others had a splattering of riders in CAT-5 through CAT-1. The race was “handicapped” with teams heading out in small groups over a span of 45 minutes. First team across the line would win. We were seeded in the middle of the pack.

Rapha, the British cycling apparel company which has wedded a retro wool aesthetic with urban bike messenger chic and a stylish technical fit was coming to town. I have been a huge Rapha fan for several years and would own only Rapha gear if my salary allowed. As it is, I can afford only one or two Rapha purchases each year, yet I follow the Rapha-sponsored riders with awe and anticipation. Rapha sponsors elite teams such as Rapha Condor team in England as well as two US “Continental” squads that fit more easily into the randonneuring ethos of long, self-supported epic rides. Continental riders wear Rapha gear and their ride reports covering some of the most beautiful sections of North America are featured with eye-popping photos on the Rapha web site.
When I heard in mid-April that Rapha was planning to sponsor this race in our backyard, I knew that we had to assemble a local team. I felt like Dave Stoller in Breaking Away with the Italians coming to town. The locals were going to get a chance to race with the big boys (and girls). Mike Newman, who co-owns the Bicycle Depot in New Paltz, assembled a strong team and we were in. Knowing the local roads and specifically the hills we had in store for us was helpful. Danny Brennan, the former Bicycle Depot owner who now lives in Pennsylvania, was our strongest rider and did more than his share of pulling us over hill and dale throughout the day. We also had super strong road riders and triathletes Alex Sherwood and Travis Turner on board along with CAT-3 racer Patrick Clifford who recently finished third at Battenkill, Mike and me.
The race covered a challenging 200K course with 8500 feet of climbing. We began with a 1000-foot climb up route 44/55 over the Shawangunk ridge. On the climb we passed the HUP United team that had started 5 minutes before us. The next section contained rollers with a general ascent to the foot of the fable Sugerloaf climb. A several mile-long climb with a grade of up to 18%, Sugarloaf is a killer. The Rapha crew set up the first check point in a hair-pin turn just before the last bit of climbing. They refilled our water bottles and handed out bananas, gels and energy bars for those in need. There was a sweet descent that followed and then about 20 miles of “alpine” riding along a quiet stream in beautiful Frost Valley. After our disciplined paceline rolled through this valley, we enjoyed another screaming descent down Slide Mountain, a hill I normally do in reverse. It felt like sweet revenge on that bloody hill to ride down it for a change. Downhill riding is a major limiter as far as my racing goes, so I expended the slight gain I was able to muster on climbs by heading out in front of my team on the big descents. While they love a good 50 mph descent, I am happier at 40 mph. Looking at the computer, though, I realize that I topped out at 42 mph which is a PB for me.

At the bottom of the hill, several of our riders needed to refill their bottles so we stopped at the small deli and then hammered out the stretch of Route 28 down to the town of Phoenicia were we hit checkpoint 2. Around mile 85 as we neared the Ashokan Reservoir, we saw the first (and only) team to gain ground on us. Empire Cycling, whose Mike Magritte recently took second place in a recent Philadelphia criterium race would drop us like a bad habit. They caught us as we waited at the only red light on the course. I felt like a fish looking back at a pack of sharks. We held their wheels for a mile of so until we realized that just wasn’t going to work. We rolled on at a good pace and prepared for the last major climb of the day at mile 105. It was the climb over Mohonk mountain that all of us knew so well.
After a day of hard riding, I finally cracked a bit on the back climb of Mohonk. It was close to 90 degrees at this point; I should have poured some cold water over my head to cool down, but all I had in my bottles was warm Perpetuem. We regrouped as I crested the hill and enjoyed a fast and pleasant descent into New Paltz. We didn’t know how far back the next team was so we kept the pace high on the climb back up Route 299. Before Mohonk our pace averaged 21 mph which is not too shabby with about 8000 feet of climbing. After it, our average dropped down to 19.2 which was still pretty respectable over a hilly 200K. On the final few miles, we learned from one of the photographers that the next team was quite far back so we relaxed a bit just as the skies opened up to cool us off. It looked like that beer was staying in New Paltz.
Racers from each of the eleven teams gathered on the porch of the house that Rapha rented as a base to enjoy some pizza and share epic tales from the ride. It occurred to me, as I ate my fourth slice, that the Rapha Gentlemen’s Race wasn’t like Breaking Away after all. The local team took second place rather than first, and those “Italians” sure were nice.
Posted by George Swain at 12:05 PM
Email ThisBlogThis!Share to TwitterShare to FacebookShare to Pinterest
Labels: 200K, Gentlemen's Race, race, Rapha